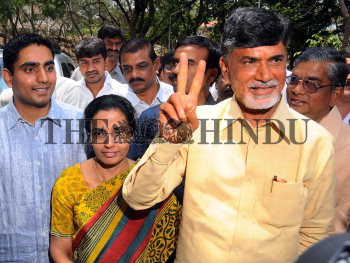 Caption : HYDERABAD,16/04/2009: Telugu Desam party president N. Chandrababu Naidu along his wife and son walks in to polling station to cast their vote at a polling station in Jubilee Hills in Hyderabad on April 16, 2009. As many as 3.11 crore voters, half of them women are eligible to cast their votes in 36,124 polling stations to decide the fortunes of 315 candidates for Lok Sabha and 2,148 candidates for assembly elections across 13 district of Telengana and north coastal Andhra. Photo: Mohammed Yousuf