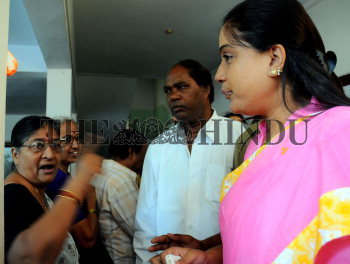 Caption : HYDERABAD,16/04/2009:' In a democracy all are equal, you came to vote why donāt you stand in a queue just as we are' an angry women voter pulling up at the Telangana Rashtra Samiti Medak Lok Sabha candidate Vijayashanti at a polling station in Euro School at Banjara Hills in Hyderabad on april 16, 2009. Lady Amitabh does not care for other voters who were standing in a line for an hour, she directly walked into the booth and cast her vote. Photo: Mohammed Yousuf