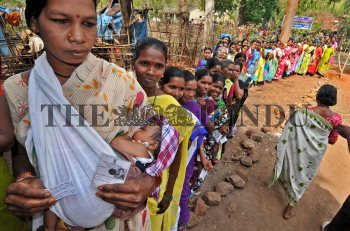 Caption : VISAKHAPATNAM, 16/04/2009: ELECTION SPECIAL: Tribal women form a serpentine queue to cast their franchise in the first phase of polling for Assembly and Lok Sabha at Lothugedda in Chintapalle Mandal, an interior area under the grip of Maoists, about 150 km from Visakhapatnam. Maoists have called for poll boycott. Photo: K.R. Deepak