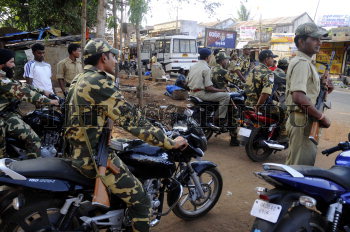 Caption : PHULBANI,15/04/2009: Additional forces are in vigil on the eve of poll in Kandhamal district on April 15, 2009 which is nearly 280 kilometers away from Bhubaneswar. Photo: Ashoke Chakrabarty