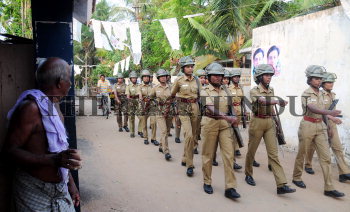 Caption : THIRUVANANTHAPURAM,15/04/2009- A team of police women from Tamil Nadu take out a flag march through a fishing colony at Valiyathura in Thiruvananthauram on April 15, 2009, the eve of the Lok Sabha polls in the State. Twenty companies of police from the neighbouring States have reached Kerala in connection with the elections. Photo: S. Gopakumar