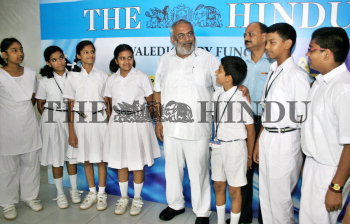 Caption : COIMBATORE,14/04/2009: BEING UPDATED THROUGH MEDIA: C.R. Swaminathan (fifth right), Chairman, CII, Southern Region, interacting with students of Air Force School, Redfields, at the valediction of the Newspaper in Education programme of The Hindu on April 14, 2009. Wing Commander T.N. Sridhar (third right) is in the picture. Photo: S. Siva Saravanan