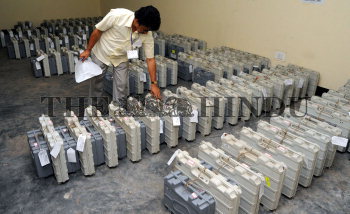 Caption : SILCHAR,15/04/2009: Last minute check: An election official checking the electronic voting machines (EVMs) before distributing them in various polling stations on the eve of voting in Silchar district of Assam on April 15, 2009. Voting for the first phase of Lok Sabha election will take place in six north eastern states on Thursday. About 714 million voters will cast their votes in the 15th Lok Sabha election which is going to be held in five phases from April 16 to May 13. The results of the election will be announced on May 16. Photo: Ritu Raj Konwar