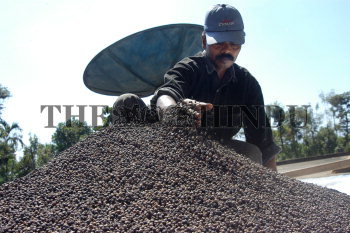 Caption : A farm worker drying pepper at a farm near Kalpetta in Kerala’s Wayanad.Pepper prices have started picking up in recent days on strong dometic and demand very thin arrivals. The export of Pepper from India during April-February 2008-09, has been 23,350 tonnes valued Rs.384.10 crores as against 31,760 tonnes valued Rs.466.26 crores of last year. The average export price of Pepper has gone up from Rs.146.81 per kg in 2007-08 to Rs.164.49 per kg in 2008-09. The low inventory in the major international markets due to the economic recession is reported to be the major reason for the decline in export of pepper.according to Spices Board's latest report. Photo: K_K_Mustafah 15/4/09