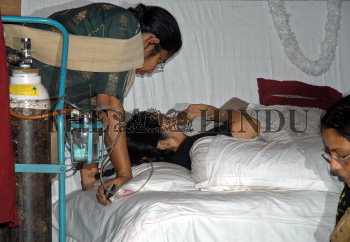 Caption : KOLKATA: Trinamool Congress supremo Mamata Banerjee, who is on a hunger strike since December 04, 2006, reportedly fallen sick on December 26, 2006 and is administered oxygen by doctors and medical professionals of the party, in Kolkata. Photo: Sushanta Patronobish