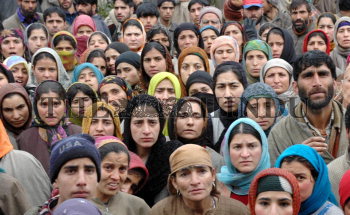 Caption : Kashmir women wailling after their houese were destroyed during gunfight between Security Forces and militants in Tilgam, Pattan 45 kilometers north of Srinagar December 26, 2006. A three-day battle between Army soldiers and militants in a village ended Monday, killing two militants of the Lashkar-e-Tayyaba militant group, one senior army officer and one civilian, police and army officials said.