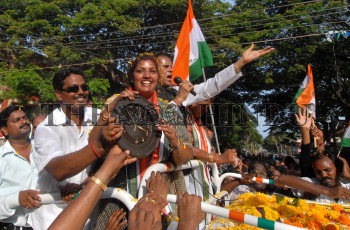 Caption : VISAKHAPATNAM, 14/04/2009: ELECTION SPECIAL: LAST FEW MINUTES: Union Minister and Congress candidate for the Visakhapatnam Lok Sabha seat D. Purandareshwari shows the watch during last few minutes of her campaign in Sagarnagar while Rajya Sabha MP T. Subbarami Reddy addresses the crowd as campaign ended at 4 p.m. in Visakhapatnam on April 14, 2009. The entire region will go to the polls in the first phase on April 16. Photo: K.R. Deepak