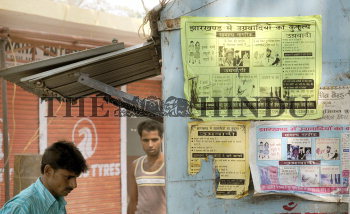 Caption : Kolkata: The first phase of poll will take place in Jharkhand on April 16. During this phase people of Jharkhand will vote in seven parliamentary constituencies, Chatra, Khunti, Hazaribagh, Kodarma and Palamou.. Police and para-military forces are high alert in the state to conduct a peaceful vote in these are highly naxalite infested areas in the state. Here the local police have displayed posters to educate people against the extremist groups operating in the state. Out of 24 district in Jharkhand, 18 districts are infested by the naxalites. Photo: Arunangsu Roy Chowdhury April 14, 2008.