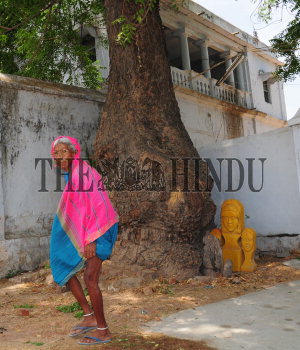 Caption : HYDERABAD,13/04/2009: An old lady passes by former Prime Minister late P.V. Narasimha Rao's residnce in his native village Vangara in Karimnagar district on April 13, 2009. The small village has not seen any development despite having sent a PM. What was once a total Congress supporting village, it is now divided between Grand Alliance, PRP and Congress parties. Photo: H. Satish