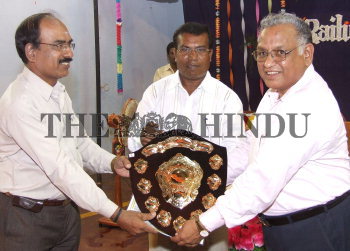 Caption : TIRUCHI, TAMIL NADU, 13/04/2009: Former Chief Workshop Manager, Golden Rock Railway Workshop, G.R.K. Raju giving away a shield to an officer of the workshop at the 54th Railway Week celebrations organised by the Workshop in Tiruchi on April 13, 2009. J. Diji, Chief Workshop Manager is in the picture. Photo: R.M. Rajarathinam