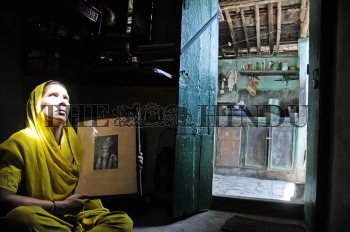 Caption : KOLKATA, 13/04/2009: Book relief: Sultana Begum, the great grand daughter-in-law of India's last Emperor Bahadur Shah Zafar, lives in a thatched house at a labour colony on the banks of the Hooghly, Howrah. Fifty-five year old Sultana Begum got married to late Mirza Md. Bedar Bukht, the great grandson of the last Emperor, in 1965. After her husband's death, she used to run a makeshift tea stall near the slum to bring up her six children. But the expansion of the Foreshore Road compelled her to close the shop. Now, she gets a pension of Rs 400 a month from the Central Government and also earns Rs 50 a day by {lsquo}churi' (bangle) making. She was delighted to know that the proceeds of the sale of the book {lsquo}Prime Ministers of India: Bharat Bhagya Vidhata', will come to her. {mdash} A. Roy Chowdhury