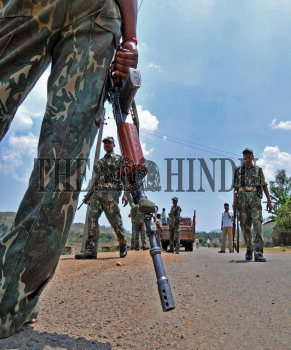 Caption : Visakhapatnam:13/04/2009: ELECTION SPECIAL: Central Paramilitary Force men from Bihar stand guard at Hukumpeta, one of the sensitive areas, where CPI (Maoists) have called for a poll boycott, in the Eastern Ghats, 150 km from Visakhapatnam. The entire region will go to the polls in the first phase on April 16.---Photo:K.R. Deepak