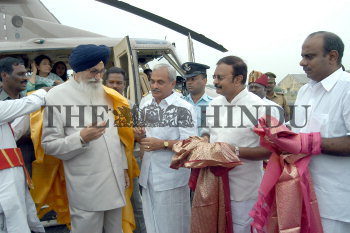 Caption : PUDUCHERRY, 12/04/2009: Tamil Nadu Governor Surjit Singh Barnala, who has been given additional charge as Lieutenant Governor of the Union Territory, being received by Puducherry Chief Minister V. Vaithilingam at the helipad on April 12, 2009. Photo: T. Singaravelou