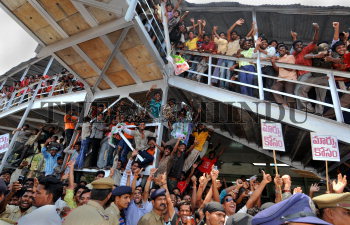 Caption : VISAKHAPATNAM, 12/04/2009: *** ELECTION SPECIAL*** Crowd cheering Actors and Praja Rajyam party president Chiranjeevi's son and nephew Ram Charan Teja and Allu Arjun during their campaign as part of the 'Praja Rail Yatra' at Visakhapatnam railway station on April 12, 2009. The actors are visiting different places in the state in a train to popularise their party's election symbol - the train engine. Photo: K.R. Deepak