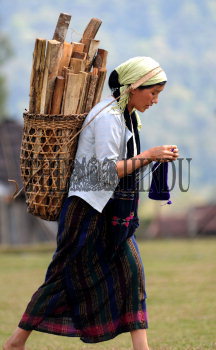 Caption : ARUNACHAL PRADESH, 12-04-2009: A Lisu tribal woman returns home after collecting firewood in Dowdi village in Changlang district of Arunachal Pradesh on April 12, 2009. Absence of LPG facility and electricity in the far flung areas of the State has led the local people to depend entirely on nature. Election campaigning is yet to reach in the majority of the remote areas of Arunachal Pradesh which is going to poll on April 16, 2009. Most of these villagers are even unaware about the election candidates. Photo: Ritu Raj Konwar