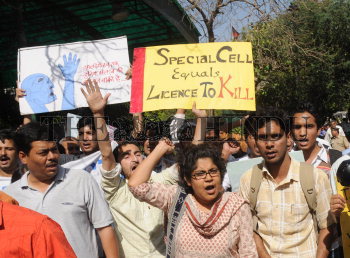 Caption : New Delhi, April 11, 2009 : Students and teachers from Jamia Millia Islamia University along with civil rights activists protesting in front of Police Headquarters in New Delhi on April 11, 2009 against Delhi Police's refusal for an enquiry into the Batla House encounter where police gunned down two suspected militants in September 2008, in the wake of the Delhi serial bombings. Photo by_Rajeev Bhatt.