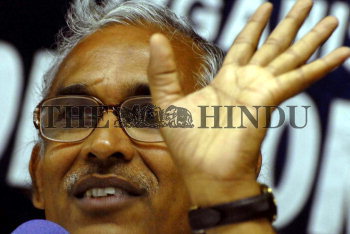 Caption : HYDERABAD:11/04/2009:.The CPI-M Polit-bureau member B.V. RAGHAVULU, gestures while replying volley of questions at a meet-the-press programme held in Hyderabad on April 11, 2009. Whether the party was inclined to join the government both at the Centre and in Andhra Pradesh if the Third front and the TDP-led four-party alliance were voted to power, the party will take a decision on joining the new government both at the Centre and in the state after assessing the post-poll situation. Photo:Mohammed_Yousuf