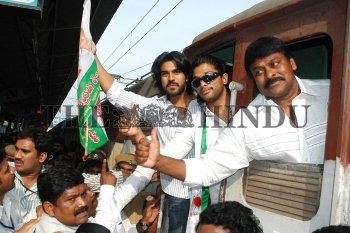 Caption : HYDERABAD:16/03/2009: ELECTION SPECIAL. Actor turned-politician, Praja Rajyam party president Chiranjeevi and other actor Ram charan Teja and Allu Aravind, gestures while flagging off 'Praja-Rail-Yatra' at Secuderabad railway station on April 11, 2009. The train-expedition to promote the Train Engine as the partyâs election symbol considered to be symbolized the party policy for social justice as it carries all section of people to one destination. The campaign train will stop in 38 stations across state where they seek the support of voters for the fledging party. This first time in history that political party uses a train for electioneering PHOTO: NAGARA GOPAL