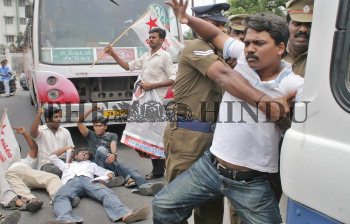 Caption : COIMBATORE 11/04/2008: Police remove Students Federation of India activists who staged a road blockade demanding police action against the perpetrators of an alleged ragging incident affecting a student of the PSG College of Arts and Science, in Coimbatore on April 11, 2009. Photo:K_Ananthan.(Digital image)