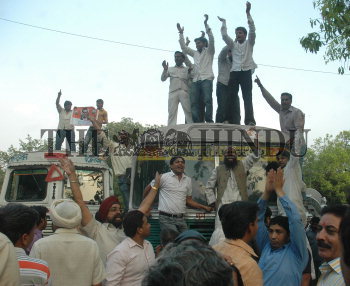 Caption : NEW DELHI, 09/04/2009: Supporters of Jagdish Tytler, who was exonerated by the CBI of his involvement in the anti Sikh riot erupted aftermath of Indira Gandhi's assassination, blocking the traffic after the press conference, in New Delhi on April 09,2009. Photo: Sandeep Saxena