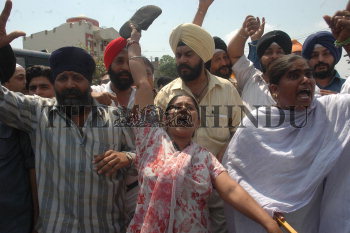 Caption : NEW DELHI, 09/04/2009:Sikh demonstrate against the clean chit given by CBI to Jagdish Tytler and Sajjan Kumar in the anti- Sikh riot erupted after the assassination of the then Prime Minister Indira Gandhi, in front of Karkardooma Court, in New Delhi on April 09, 2009. Photo:Sandeep Saxena