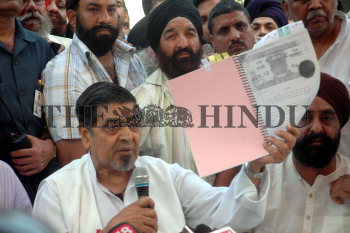 Caption : NEW DELHI, 09/04/2009: Congress leader Jagdish Tytler addressing a Press conference in New Delhi on April 09, 2009. The Congress party decided to drop Jagdish Tytler and Sajjan Kumar (not in the picture) as its candidates for the Lok Sabha elections after the two - under fire for their alleged involvement in the 1984 anti-Sikh riots - "offered to withdraw'' from the contest in view of the controversy over their candidature. The announcement came soon after Tytler - who was to contest the North-East Delhi seat - told journalists that he would not pursue his candidature, as the issue had caused embarrassment to the party. Photo: Sandeep Saxena