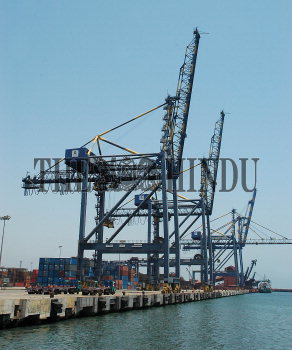 Caption : Stand alone photo : Berths are now waiting for container ships, and not the other way around at DP World Chennai, the private container terminal at the Chennai port. This was due to productivity improvement to 30 moves (shifting of containers from the ship to the shore and vice versa) per hour compared to 18 moves five years ago. The terminal handled 765 ships in 2008 compared to 419 in 2002 . Caption : Raja Simhan Photo: Bijoy Ghosh