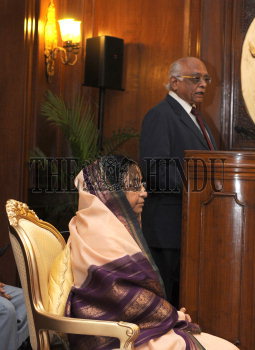 Caption : NEW DELHI, 09/04/2009: President Pratibha Patil interacting with students and experts from IITs and science institutes around the country, through Video conferencing, after inaugurating the initial phase of the National Knowledge Network (NKN), in New Delhi on April 09, 2009. R. Chidambaram, Principal Scientific Advisor to the Government of India is also seen in the picture. Photo: Rajeev Bhatt