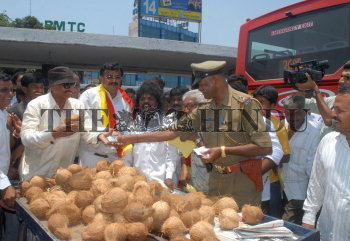 IT'S NOT ONLY TO COLLECT ELECTION FUND BUT ALSO TO

Caption : Bangalore 09/04/2009 :Coconut and Election! Vatal Nagaraj, Kannada Vatal Paksha leader who is a candidate for Bangalore South constituency came out with a novel idea of selling Coconuts on busy BMTC main bus stand in Bangalore on April 9, 2009. It's not only to collect election fund but also to Campaign , Coconut is his election symbol. Photo: K.Gopinathan