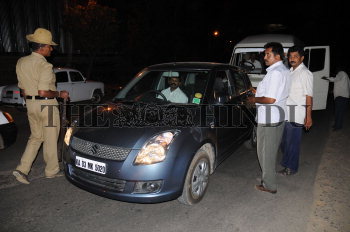 Caption : BANGALORE, 08/04/2009: Rajarajeshwari Nagara BBMP officials posted as Election squad along with the police officials in checking the four wheelers at Rajarajeshwari Nagar Arch,coming under Bangalore Rural in the Parliamentary elections, for cash and liquor movement, in Bangalore on April 08, 2008. Photo : K. Murali Kumar