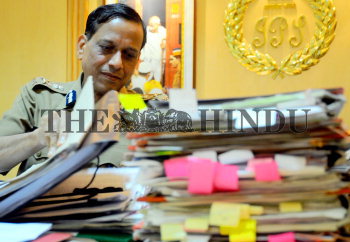 Caption : ĘHYDERABAD:08/04/2009: ELECTION SPECIAL: Director General of Andhra Pradesh Police, Ajit Kumar Mohanty, busy officer continue his work while talking to 'The Hindu' team at his office in Hyderabad on Wednesday. Mr Mohanty popular among his colleagues as AK-47 is all about, wrongdoers fear him, troublemaker think twice before indulging in any criminal activity and those who feel that they can escape the law, I respect rule of law and those who respect itä said .Photo:Mohammed_Yousuf