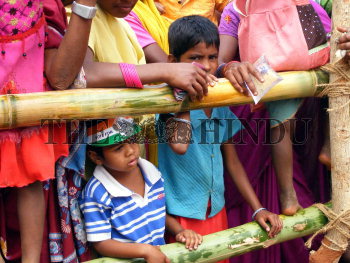 Caption : BERHAMPUR, 09/04/2009: Children are waiting eagerly to see AICC general secretary Rahul Gandhi as his scheduled arrival at the campaign meeting was delayed by one hour at Baliguda in Kandhamal district of Orissa on April 08, 2009. Photo: Lingaraj Panda