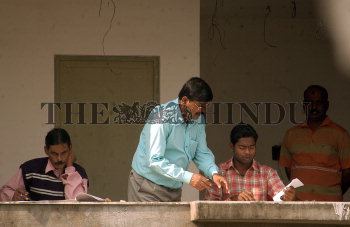 Caption : Officials help candidates at the examination center for the test conducted by Tata Motors officials with the help of West Bengal Industrial Development Corporation at the Santi Ceramics office at Singur on December 25, 2006. Twenty-four people, chosen from the families of landowners appeared for an examination whose land has been acquired for the proposed Tata Motors project in Singur, West Bengal. The eligibility of the candidates was any ITI degree or its equivalent. After the test, the eligible candidates will go to Jamshedpur for further training before joining the company. The state government is also running training centers for women and others who have been affected by the land acquisition. Photo: A. Roy Chowdhury