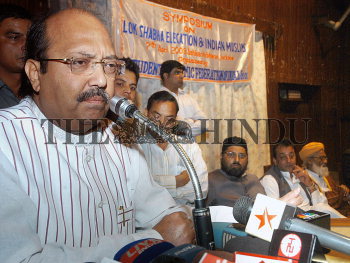 Caption : Lucknow:07/03/2009:Veiled threat: Amar Singh during a symposium organised by a minority student fedration in Lucknow said if it become intolerable in Samajwadi Party he may leave party in Lucknow on Tuesday. Also seen Sanjay Dutt (second from right) .Photo;- Subir Roy