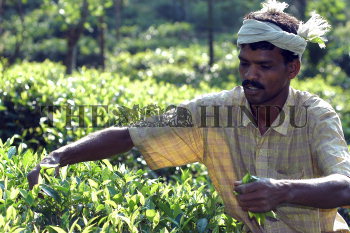 Caption : A worker plucking tea leaves at a plantation near Kalpetta, Kerala's Wayanad distict. Tea shipments have shown an upward trend as Pakistan and Iraq had shown good patronage. Export to Pakistan is likely to touch 20 mkg, boosting the tea industry in the southern parts of the country which accounts for 90.9 mkg of the total 150.8 mkg during the January- september period. Overall exports during January - October stood at 150.81 mkg and production at 820.4 mkg. Photo: K.K. Mustafah 25/12/2006