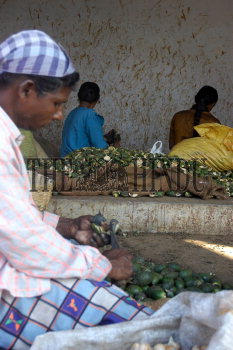 Caption : Arecanut shelling in progress at a collection centre Sulthanbattery in Kerala's Wayanad district. The Union govenrment has decided to fix tariff value for arecanut imports in the light of the allegation that the imports were destablising the domestic market and were of inferior value. It also plans to set up a quality certification agency as rumours of the imported variety being mixed with the native variety and being sold to the 'gutkha' manufacturers at higher price held firm. Photo: K.K. Mustafah 25/12/2006