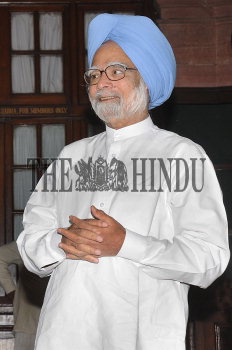 Caption : New Delhi, April 5, 2009 : The Prime Minister Manmohan Singh during a function to pay floral tributes to Jagjivan Ram on his 102 nd birth anniversary at the Parliament House, in New Delhi on April 5, 2009. Photo by - Rajeev_ Bhatt.