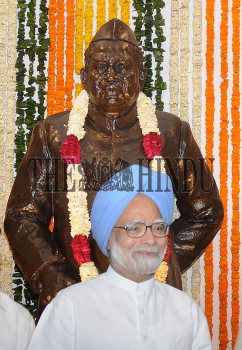 Caption : New Delhi, April 5, 2009 : The Prime Minister Manmohan Singh poses after the floral tribute was paid to Jagjivan Ram on his 102 nd birth anniversary at the Parliament House, in New Delhi on April 5, 2009. Photo by - Rajeev_ Bhatt.