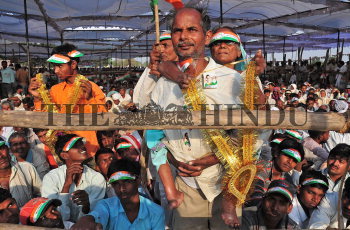 Caption : ELECTION SPECIAL CHANDAULI (UTTAR PRADESH), 03/04/2009 An elderly congress supporter carried by her son awaiting for the Congress leader Rahul Gandhi with a garland at an election rally in Chandauli town on April 03, 2009. Rahul cancelled his campaign trip halfway and returned back to Delhi to attend funeral of his relative. Photo: Akhilesh_Kumar