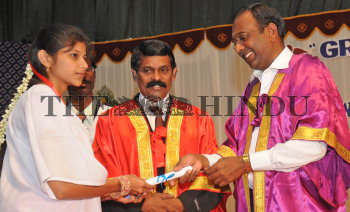 Caption : TIRUCHI, 03/04/2009: V. Ramachandran, Vice-Chancellor of Anna University - Tiruchi presenting a degree certificate to a student during the convocation of the K.A.P. Viswanatham Government Medical College in Tiruchi on April 03, 2009. Dean of KAPV Medical College and AGM Government Hospital N. Balasubramanian is in the picture. Photo: M. Moorthy