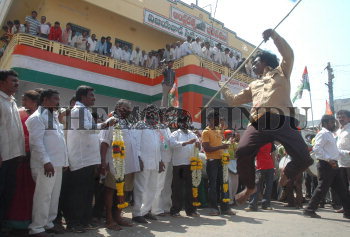 Caption : A congress worker performs 'Karra Samu', a traditional rural art of handling a stick with ease, in Vijayawada on April 3, 2009, prior to a rally to be taken out by Malladi Vishnu (not in picture), Congress candidate in Vijayawada Central Assembly Constituency. Photo: V. Raju