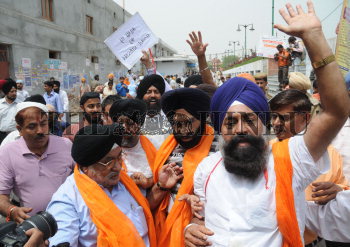 Caption : NEW DELHI, 03/04/2009: Sikhs protesting at Bangla Sahib Gurudwara against the clean chit given by the CBI to Congress MPs Jagdish Tytler and Sajjan Kumar of 1984 Anti-Sikh riot charges, in New Delhi on April 03, 2009. More than 3000 people including 2000 Sikhs lost their lives during the October 31, 1984 riots that took place after the assassination of former Prime Minister Indira Gandhi. Photo: V.V. Krishnan