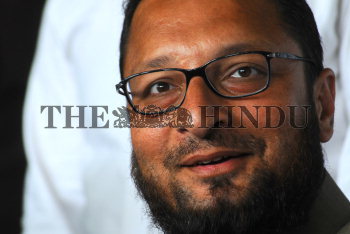 Caption : HYDERABAD, 02/04/2009 ELECTION SPECIAL: Majlis-e-Ittehadul Muslimeen (MIM) party president Asaduddin Owaisi, who is trying to regain the Hyderabad parliamentary seat, speaking to journalists at the party's headquarters Dar-us-Salam, in Hyderabad on April 02, 2009. MIM, the most influential Muslim political party in Andhra Pradesh and presently having 5 sitting MLAs with the vote bank of 42.5 per cent campaigning for the forthcoming elections, calling Muslims to unite under one political banner taking advantage of their strength and urging Hindus to join hands of friendship. Photo: Mohammed Yousuf