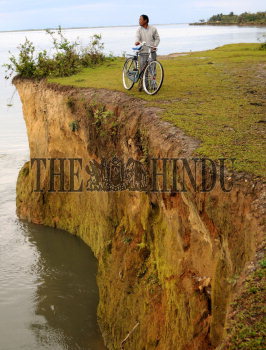 Caption : DIBRUGARH 02-04-2009 : (ERROSION IN DIBRUGARH DISTRICT OF ASSAM) Gahin Gogoi having a look of his village which was eroded away by the Brahmaputra River in Rohmaria village in Dibrugarh district of Assam about 280 km away from Guwahati city on April 2, 2009. This is the same spot from where the Prime Minister Manmohan Singh inspected the Rohmaoria erosion on January 17, 2006. After several promises being made by the Prime Minister three years back, nothing has been done so to save the village. People of the Rohmoria area may not cast their vote in the coming Lok Sabha election as no political party is concerned about their cause. PHOTO: RITU_RAJ_KONWAR