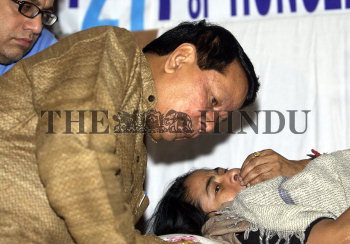 Caption : KOLKATA: The Union Minister for Information and Broadcasting, Priya Ranjan Das Munshi, called on Ms Mamata Banerjee, Trinmool Congress leader, requesting her to call off her hunger strike, which entered its 21st day today. Apparently, the Prime Minister, Dr. Manmohan Singh, who was in Kolkata on December 24, 2006, had asked him to do so. Photo: Sushanta Patronobish