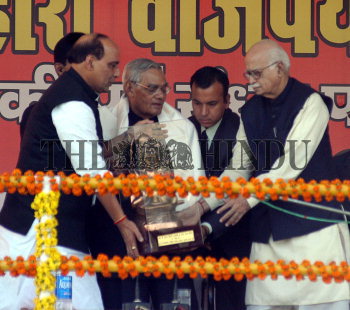 Caption : Leader of the Opposition in the Lok Sabha L.K. Advani and BJP president Rajnath Singh felicitate the former Prime Minister, Atal Bihari Vajpayee, at the party's parivartan rally in Lucknow on December 24, 2006, on the eve of Mr. Vajpayee's birthday. Photo: Subir Roy