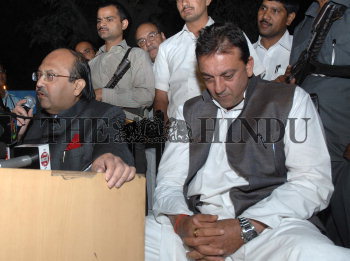 Caption : NEW DELHI, 31/03/2009: Film star and Samajwadi Party candidate from Lucknow Sanjay Dutt (right) with the party General Secretary Amar Singh at a press conference, in New Delhi on March 31, 2009. The Supreme Court refused to suspend the conviction and sentence of six-year imprisonment imposed by the trial court on actor Sanjay Dutt in the 1993 Mumbai serial blasts case, to enable him to contest the Lok Sabha polls. Photo: Shanker Chakravarty