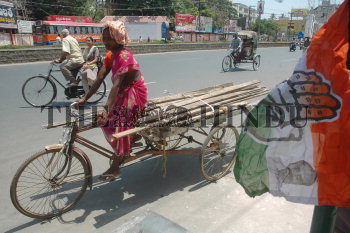 Caption : VIJAYAWADA(AP) TUESDAY, 31-03-2009. A migrant labourer from Khammam district pedals her way to work going past a pole with the Congress party flag, on Mahatma Gandhi (Bandar) Road in Vijayawada on March 31, 2009. Political parties look at migrant labour as a good vote bank but hardly pay attention to their problems. _. PHOTO: RAJU_V. (DIGITAL IMAGE)