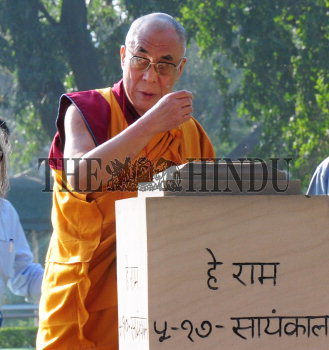 Caption : NEW DELHI, 31/03/2009: Tibetan Spiritual leader, Dalai Lama paying homage at Gandhi Smriti, during his visit to eight places of prayer and worship to pray for peace in India and the happiness of its people, in New Delhi on March 31, 2009. This is to mark the 50th anniversary of Dalai Lama's arrival into exile in India. Photo: S. Subramanium