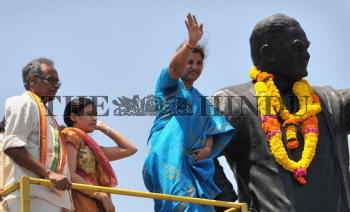 Caption : Visakhapatnam:30/03/2009: SEEKING DAD'S BLESSINGS: Union Minister D. Purandareshwari greeting her supporters after paying respects to a statue of her father and TDP founder, the late N.T. Rama Rao, before filing the nomination as the Congress candidate for the Visakhapatnam Lok Sabha seat in Visakhapatnam on March 30, 2009. Ms Purandareswari's husband D. Venkateswara Rao and daughter are behind her.---Photo:K.R. Deepak